Home Minister Ram Bahadur Thapa ‘Badal’ has said that Nepal has been able to make a good impact in the international forum with significant improvement in the state of law and order in the country.
Speaking at the Bagmati state-level security symposium organized by the Home Ministry here today, he said the government is making diplomatic efforts with India to return Nepali territory in Kalapani. “A new strategy is being adopted to guarantee law and order to the people, and mobilize security forces to consolidate border security outposts to oversee the demarcation with the two neighboring countries,” he said.
He also shared that the government is moving ahead with policy programs in order to realize its goal under the Visit Nepal year 2020.
Chief Minister of Bagmati Dormani Poudel and Minister for Internal Affairs Shalikram Jamakattel are also taking part in the seminar.
The security symposium has been organized in order to review the state of law and order in the 13 districts in Bagmati, adopt ways to check crime, distribution of passport and citizenship, and seek ways to resolve border issues with China, according to Chief District Officer of Makwanpur Narayan Prasad Bhatta.
Home Secretary Maheswar Neupane, heads of Nepal Police and Armed Police and National Investigation Department, high-ranking Nepal Army officials and CDOs of all the 13 districts are taking part in the symposium.

Flood sweeps away 60 houses and sheds, Bahunepati bridge at risk 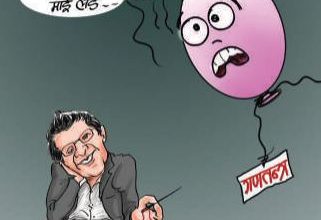 Flood sweeps away 60 houses and sheds, Bahunepati bridge at risk

Tale of the trans-Himalayan district: vaccine being transported via tractor

Vaccine supply has witnessed big trouble in the trans-Himalayan district, Mustang. With a regular vehicular

Two rhinos including one calf found dead in CNP

Two rhinos were found dead at the Chitwan National Park on Sunday. According to CNP

The government has decided to shut its borders until coming September 16, considering the increasing